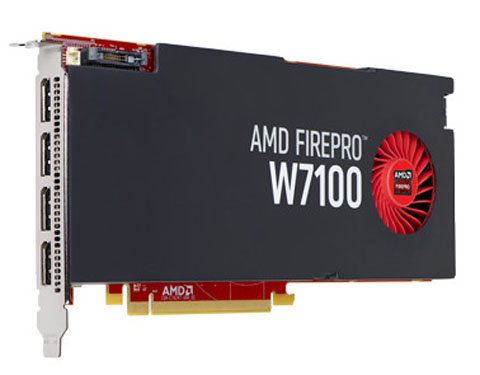 AMD FirePro W7100 graphics features double rate GeometryBoost, which is enabled in the AMD Graphics Core Next architecture. The W7100 GPU comes with four graphics engines that allow it to process four primitives per clock cycle – twice as much as the AMD FirePro W7000 GPU that’s only capable of two triangles per clock cycle – and provides ultra-high geometry processing performance, enabling the smooth manipulation of complex models.

With a 256-bit memory interface and up to 160 GBps of memory bandwidth, users can edit 4K video, layer in multiple effects and color correct, or load sizeable assemblies and data sets and manipulate them in real time.

Allows the GPU to process geometry data at a rate of twice per clock cycle. Triangle rates increase twofold relative to a GPU that does not possess GeometryBoost. The GPU on the W7100 cards features four graphics engines that allow it to process four primitives per clock cycle.

Enables highly immersive and powerful multitasking experiences across multiple displays. Each AMD FirePro W7100 is capable of driving up to four displays at 4K resolutions each.

DisplayPort 1.2a and Adaptive-Sync Support

AMD FirePro W7100 cards are designed to support OpenCL 2.0. Tap into the parallel computing power of its GPU and get up to 3.3 TFLOPS of peak single precision compute power to accelerate compute-intensive tasks.

Performs real-time analysis of applications that utilize a GPU. In the event that an application is not making the most of the power available to the GPU, AMD PowerTune technology can improve that application’s performance by raising the GPU‘s clock speed by up to 30% automatically.

AMD ZeroCore Power technology leverages AMD's leadership in notebook power efficiency to grant AMD’s desktop GPUs the ability to power down when your monitor is off, also known as the "long idle state."